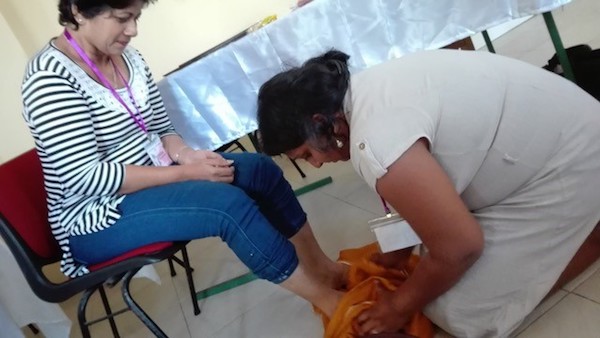 Much of what we as DAI do is address the abuse of power. And the abuse of power is an issue that hit the charity sector here in the UK earlier this year with claims of sexual abuse and harassment. Starting with the revelations about Oxfam, by the end of March more than 80 cases of sexual misconduct or abuse had been reported to the Charities Commission by overseas development charities.

Travel the 8,700 kilometres from London to Colombo, Sri Lanka, where for twenty-five years up to 2009, civil war ravaged the country. Many of the men died and many women were left vulnerable, even after the cessation of hostilities, because some of those sent to bring help often wreaked harm. Some aid workers and even some Pastors abused the vulnerable in exchange for the promise of provision and protection. Even today, it is estimated that 60% of women in Sri Lanka will suffer domestic abuse at some time during their lifetime.

Given this context, Kendall Atkinson, DAI’s Ministry Centre Director in Sri Lanka, and one of his colleagues were so burdened by the history of abuse suffered by so many of the women of Sri Lanka that they began to prepare a Workshop to help lead survivors of abuse through the slow process of healing.

“Daughters of God: Overcoming the Effects of Abuse” was launched in May 2018, with 17 women attending the 3-day Workshop.  Many of these women have been convinced that they are nothing more than victims. But they are also beloved daughters of God, can also be effectively used by him and can have a significant role to play as leaders in their communities.

On the first day the focus was on being created in the image of God and on recognizing and resisting abuse, especially abuse by leaders.

On the second day the participants thought through the effects of abuse and about God’s apparent silence in the face of abuse.

The final day there was discussion about restoration after abuse and what it means now for them to live as God’s daughters.

Kendall, reflecting on the Workshop observed that many of the women had been ministered to through this Workshop. The materials will now be translated into Sinhala and Tamil, so the Workshop can be taken to the women of Sri Lanka who don’t speak English, and we will explore across DAI how this Workshop can be adapted and contextualised to some of the other regions where we work.

Trauma mars the human person at the very deepest level and the road to healing is fraught with risk and pain. Please pray that God will use this Workshop to heal others who have been impacted by abuse and that God would grant those who attend future Workshops a sense of safety to open their hearts to him and to a healing that touches the very most sensitive core of their beings.

email
This site uses cookies to improve your experience. Find out more