The region is home to 21.3 billion and rests squarely in the midst of the middle “belt” of Africa where ethnic and religious tensions cause ongoing violence.* The region suffers from high levels of illiteracy, poverty, HIV/AIDS, corruption and the limited availability of literature in local languages. The official language of the area is French, although there are many local adaptations. About half of the population claims Christianity followed closely by Islam.* Animism is deeply embedded in the culture often resulting in syncretism in those following Christianity or Islam.

Francophone Africa leaders who participated in DAI programs in 2019.

LEADERSHIP ISSUES
A failure on the part of leaders to demonstrate Christ-like humility and graciousness in their walk and ministry not only stunts their own fruitfulness but passes on their flaws to their congregations. The huge numbers of unaffiliated Christians reflect this, and even within most churches there is little depth of commitment and limited grasp and application of the truths of Scripture.

While Christians are increasing in number there is the need for the church to grow in spiritual maturity and have a transforming influence on the region. Because of the language barrier and the colonial history of involvement with France and Belgium, the Evangelical Church has often been cut off from major international initiatives (primarily offered in English) to provide training and leadership development resources.

DAI’S RESPONSE
DAI offers non-formal multi-session training workshops to thousands of leaders annually in the region, focusing most efforts on the more remote areas that are rarely reached.
DAI also offers its Master’s Degree in Organizational Leadership, through local universities. Because the MAOL is a part-time “hybrid” program, with one week residencies each semester in the three year program, Christian leaders can stay home, continue working and still participate in an internationally recognized program in their native language. As one leader said, “I want to do this program rather than study abroad, because then I can discuss these issues with other leaders from my country and together we can find ways to bring lasting change.” DAI hopes to facilitate the much needed spiritual transformation in the leaders we work with. Integrity in leadership will make a difference if even just a few key people speak, act and live with integrity.

HISTORY OF DAI IN THIS REGION
DAI began working in Côte d’ Ivoire in 1999 and the ministry center was founded in 2001. Since its founding in the capital city of Abidjan, the staff have been intentional about offering regular training throughout the Northern areas of the country to serve leaders who rarely have the chance to grow and learn. Women leaders are another primary focus for this ministry center.

Workshops began in 2007 in Togo and, through patient work, now take place throughout the entire nation facilitated by local volunteers in each region who have been discipled by DAI staff.

The MAOL program began in the Democratic Republic of Congo (DRC) in partnership with the Methodist Church in 2004 and has since spread to seven additional countries, Burkina Faso, Burundi, Cameroon, Central African Republic, Chad, Republic of Congo (Brazzaville) and Senegal. Each academic institution values the programme as something they knew was needed, but they did not have the capacity to offer alone. 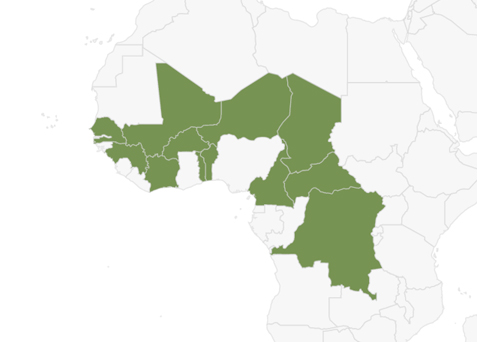